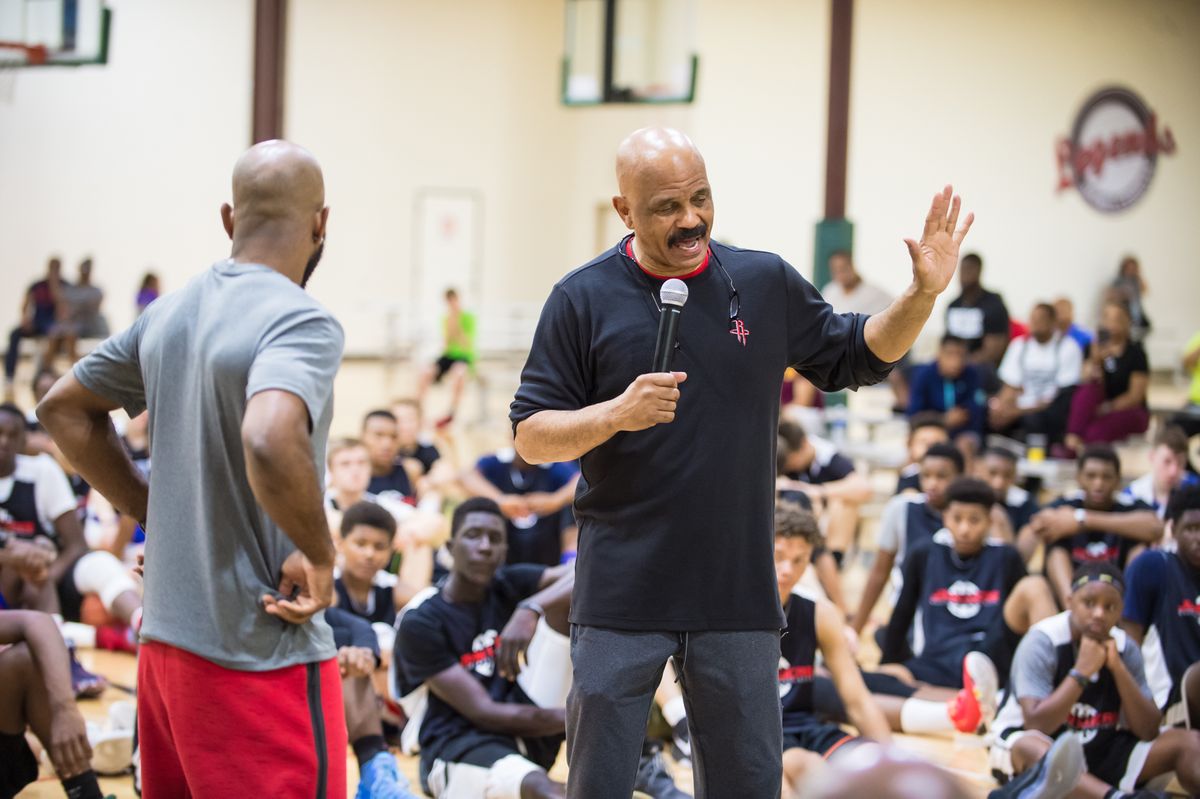 The John Lucas International Middle School Combine is the best event for elite 8th graders who believe they can build on their skill. This was our first time covering the IMSC and we left vastly impressed. Learning of players growing through this combine over the years was a big statement of John Lucas’s commitment. The event introduced some first time players to regional and national evaluators plus skilled trainers from across the nation. NBPA Top 100, Prep Insiders, Clark Francis (McDGG voter), Darnell “Tate” Johnson, Dain Ervin (Nike), Van Colman (NBPA Top 100) and Samson Kayode (USAB Asst. National Team Director) just to name a few. Here’s 5 players that were very intriguing to us.

2021 6’6″ SG Jonathan Lawson came into this event and took control of the opportunities giving. Played well in front of Scouts and demonstrated his versatility during drills. This was my first time, witnessing any of the Lawson brothers early in their career; I was extremely impressed with this youngster. Jonathan is the youngest of the 4 brothers (Keelon “KJ” Lawson, Dedric Lawson and Chandler Lawson) and he may be the best. He definitely represented the lineage of the Lawson boys last weekend.

When talking to his father Mr. Lawson about his sons development, he stated “ Johnathan allows the game to come to him. He knows how to involve his teammates and knows how to take over a game. He has learned to score and make things happen for his team in various facets of the game. He is a leader on the court and wants everyone around him to be better. I compare him to his brothers as a point guard; they are actually point forwards. His brothers can all post. He on the other hand prefers to not but he can. He is similar to his brothers with his unselfishness and knowledge of the game.”

Lawson is mobile with the ball for his height. His drive is high and he wants to be one of the best on the court, he’s also ready to rebound to start transition without any issues, He also showed consistency in his jump shots. The ceilings are extremely high for this prospect, but he will still have to fill out his body weight and frame. Lawson plans on attending East HS, this will begin his HS career.

2021 6’5″ G/SF William Jeffress (PA) is a sight to see when he is in his BAG! Once I got a visual of the Walnut Creek MS superior athlete during his combine work and drill sets, I was sold and compelled to keep watching. The Erie, PA native Jeffress, is physically fit and remarkably a threat in the open floor. I see Jeffress being dominant as a HS player and putting a bruise in the State of PA. Right now he is much stronger at the wing position than many of his peers and we hope he and his game continues to grow. I didn’t see many long range shots taken by Jeffress, his game was mostly to the rim. Hope to see him work on his shooting range and footwork and lets watch his growth as his recruitment starts to pick up.

The 6’5″ 2021 G/F Keon Edwards maybe the most talented wing in the event who resides in Texas out of Pasadena. Keon Edwards is long, athletic and very versatile. Edwards was the best looking SG at the IMSC. Ball handling was above average and he had decent form as we watched him stroke some shots in drills. Edwards is just beginning to show what he is truly capable of doing. His potential is high and with added weight and core strengthening his recruitment well be phenomenal. The Texas standout (St. Thomas Episcopal) should be on everyone’s radar. He has the characteristics to be one of the best.

During full court 1 on 1 drills, 2021 PG Jackie Johnson III was a BULLY! The sizable, aggressive, claw scratching player; Johnson was the most outstanding PG in the camp. Johnson plays with a chip and takes all competition. He seems to understand the importance of being at the IMSC and he didn’t stop impressing scouts throughout the weekend. The lefty guard from Wichita, KS aggressively got into the paint to finish and on day 2 showed his ability to knock down 3 balls consistently. There’s no question that we must keep tabs on Johnson. His growth will depend on his effectiveness at running offenses and putting players in predicaments to score at the college level.

2021 6’10” C Samuel Onu is a raw unique upcoming prospect. His presence is gigantic and has potential. What makes him so special is his reaction speed to the ball and the way he wants to destroy the basket at times. Physically Onu’s strength is obvious but needs to work on his touch when not around the basket and to demand the ball more at times. There can be stretches where he can get lost in the action so a steady PG is a must to play along Onu. The San Antonio, TX native is a clear cut prospect right now and we should hear his name ringing in the future.