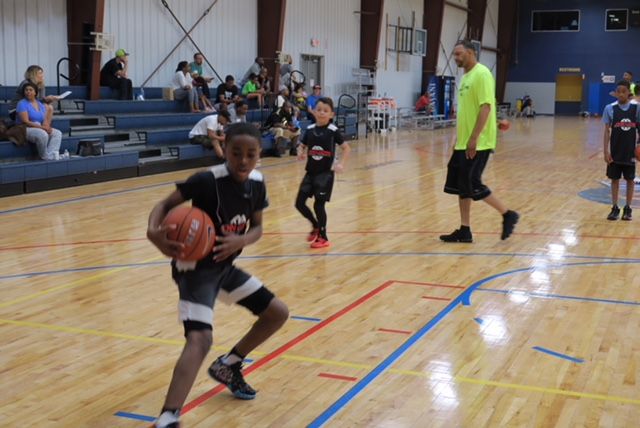 This years camp was full of young skilled guard play. It's always good to young players develop skill sets early. It was good to see over 16 states represented at this camp. This was unheard of years ago for 5th and 6th graders competing nationally in camps.

Below a few standouts from camps:

He was the most dominant player in camp. He didn't show many weaknesses. He can handle the ball, he made good decision and was good at getting his teammates involved. He could score and get to the cup at will. He seemed to get bored at times.

He was one of the intimidating players in camp. He contested every shot on the defensive end. He cleaned the glass on both ends and surprised me with the range on his jump shot. He also surprised me with his ball handling skills.

Tall left that could score in array of ways in the post. He had a soft touch 15 feet in. He also surprised me with his ball handling skills in the open court. He has a very nice upside.

He has a sweet stroke and could be streaky at times, but didn't lack confidence. He could shoot it from deep. He didn't see a shot he didn't like all weekend.

He was one of the smartest kids in camp. He had a lot of tools to work with. He has decent size, a nice stroke and decent handles. He was one of the most active players all weekend. He stayed aggressive.

He had a very good understanding of the game for a young fella. He made good decisions when he had the ball and moved well and made positive plays when he didn't. He wasn't afraid of contact.

I like the way he shot the ball from all three levels. He didn't force much and let the game come to him. He didn't seem to be intimidated by all the talent around him.

He just played within himself. He had good court vision and a good feel. He wasn't spectacular, but was one of the most consistent players all camp.

I liked the way he handle the rock and the decisions he made all weekend. He showed a nice stroke from deep. He showed good defense at times. He has a nice upside.

A little pit bull that had mad handles and was very physical. He had no problem handling contact and continuously attacked the basketball all camp.

He was tenacious all weekend. He didn't seem to take a play off all weekend. He guarded for 94 feet for the whole 5 minutes. He was a headache to whoever he guarded. He got to the rack at will and had not problem navigating in traffic and making the right play. He jump shot was decent but getting to the cup was his strength.

He has that wiggles in his game. He just has the it factor when he has the ball in hands. He has major swagger. Showed a decent jump shot and I liked his mid range game.

He was hands down one of the best shooters in camp and wasn't scared to sling it at will. He knew how to get his shot off. He has decent handles, but to really help his shooting, he needs to work more on putting it on the floor.

May be the best prospect out of four talented brothers. He had good handles and competed against older and bigger kids all weekend. He guarded 94 feet, like we ask in camp. He was one of the best kids in station work.

He has a good feel for the game. He was a leader from the start of camp for his teams. He bought a lot of energy in station work and games. He just knows how to play for a young fella.

He's jet quick and skilled. He was one the the quickest players up and down the floor. He has a good I.Q. for his age. He just sometimes gets caught doing to much. He's definitely fun to watch.

He's a good ball handler and has very good court vision. He's very crafty and shifty. I really liked how he maneuvered in traffic. He has a very nice upside.

He was strong and athletic and jet quick. He guarded from day one. He played like he came out with a chip on his shoulders. He showed a decent jump shot, but was better when he gets in the cup.

I really like how the young man held his own against much older kids. He has a good understanding and loved to compete and that showed in the one on one station work. He has excellent handles and was scared to get in the paint.

He had a excellent I.Q. for his age. He it played with the confidence of a 6th grader. He handle the ball on a string. He showed me a very good skill set. He had a nice stroke and didn't hesitate to sling it.