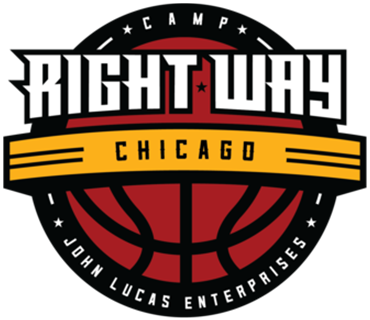 Published on September 1, 2017 by Clark Francis

He doesn't wow you with overwhelming size and ridiculous speed, quickness, and athleticism, but 6'2 8th Grader Brendan Hausen from Amarillo, TX was a model of consistency and, as a result, he edged out 6'2 Frosh Kyle Duke and 6'4 Frosh Parker Dayfrom Saginaw, MI as the best player based on performance at the 2017 John Camp Right Way, which was held last weekend at the Quest Multisport Center in Chicago, IL. Not only does Hausen have the versatility necessary to play just about anywhere on the court, but he also really impressed us with his ball handing and passing skills, excellent court vision, good moves to the basket, and ability to score from both mid-range and behind the arc. He also knows how to compete, is active on the boards, has a high basketball IQ, and did not back down when he had to defend bigger guys in the post. And, if that weren't enough, Hausen also has improved a lot since we last saw him 16 months ago when he was a 5'9 6th Grader at the 2016 John Lucas-Future of the Game in Las Vegas, NV.

Duke is a multi-dimensional athletic wing who is explosive to the basket and makes a living off transition and finishing at the rim. He will need to get bigger and stronger physically and there were times when he had a tendency to over handle, but he has a silky smooth demeanor, is very unselfish with the ball, has great body control, and, although he does have more of a slasher's than shooter's mentality, can knock down the outside shot. And Day provided the perfect complement to Duke on what was one of the best teams in camp. We're talking about somebody with deceptive athleticism, a great nose for the ball, and the skills necessary to play both inside and outside and score both around the basket and from mid-range. However, what really set him apart from most of the rest of the players in camp was his efficiency, understanding of the game, and the fact that he is very unselfish and knows how to play the game.

We also thought 5'10 8th Grader Quincy Gholar from Wichita, KS played well enough on Saturday to be in the discussion when we start talking about the top players in camp. Not only was he pretty much unstoppable with his explosiveness in transition and strong moves to the basket, which allowed him to finish and draw the and-one on numerous occasions, but he also played with a lot of energy, was aggressive on the boards and knocked down his share of outside shots. However, he transformed himself from being Dr. Jkyell into Mr. Hyde on Sunday, as he failed to get his teammates involved, took more than his share of bad shots, and displayed a me, myself, and I attitude. On the other hand, he does have big time athleticism and incredible natural talent, which explains why he is ranked as high as he is even though on the final day he was one the biggest "pigs" in camp and his next pass would have been his first. Rounding out our top five-ranked players in camp is 6'5 Frosh Nana Boateng from Toronto, ON and he was clearly a man among boys with his strength and power around the basket. He also has good hands, is a very good rebounder, passes out of the post, and is not a afraid to overpower people in the paint.

We also were impressed with the likes of 6'5 Frosh Damonze Woods from Amarillo, TX, 6'5 Frosh Jashawne Spence from Toronto, ON, 6'6 8th Grader Ethan Oakley from New Salisbury, IN, 6'2 Frosh Jacob Harris from Crown Point, IN, and 5'9 7th Grader Grant Gondrezick from Benton Harbor, MI, all of whom were good enough to be ranked in the 6-10 range based on performance in camp. Woods' game is more finesse than power and his offensive repertoire is still somewhat limited. However, it's hard not to like his length and athleticism, quickness to the basket, ability to run the court, and that fact that he has good timing and an excellent nose for the ball, which makes him a good rebounder and shot blocker. Spence has good length and athleticism and is versatile enough to play multiple positions, thanks to his good ball handling and passing skills, ability to run the court, and the fact that he can rebound, block shots, and score around the basketball.

Oakley more than makes up for his lack of quickness and athleticism with his size and ability to rebound and score around the basket. We also like the fact that he runs the court, knows how to compete and he knows what he is, which is a good old-fashioned post player. Harris is another guy with the skills, athleticism, and versatility necessary to play multiple positions and he has good ball handling and passing skills for somebody with his size and position, gets more than his share of rebounds, and can score in a variety of ways. Gondrezick gets the nod as the best pure point guard in camp and he really impressed us with his great court vision, excellent ball handling and passing skills, and ability to get his teammates involved. He also has quick hands and feet, is explosive in transition, and has an excellent pedigree (his father and uncle both in the NBA). We would have liked to see him shoot the ball more, but the word we get is that he's capable of putting up prolific numbers and, as an added bonus, he's a very humble kid and does seem to have any idea how good he is.

The camp also had some depth, as5'11 8th Grader Brandon Mitchell-Day from St. Louis, MO, 5'9 8th Grader Fontaine Williams from Wichita, KS, 6'3 8th Grader Gradey Dick from Wichita, KS, 6'1 Frosh Isaiah Long from St. Paul, MN, 6'9 Frosh Javonte Brownfrom Toronto, ON, 5'9 8th Grader Andrew Alia from Pleasant Prairie, WI, 5'11 8th Grader Trent Parke from Derby, KS, 5'8 7th Grader Staci'o Goree from Phoenix, AZ, 5'8 7th Grader Staci'o Goree from Phoenix, AZ, 5'9 8th Grader Devin Carney from Pittsburgh, PA, 6'1 Frosh Isaiah Davis from St. Paul, MN, 6'0 7th Grader Evan Boyd from Minneapolis, MN, 5'5 8th Grader Camron Amboree from Houston, TX, 6'2 8th Grader Jasen Green from Omaha, NE, and 5'9 8th Grader John-Paul Ricks from Baton Rouge, LA all were good enough to be ranked in the 11-25 range. Mitchell-Day is an athletic 2-guard and, whether it be using his speed and quickness to get to the basket or knocking down the outside shot, he really knows how to score. Williams lacks size, but he's very talented and he uses his explosiveness and athleticism to thrive in an up tempo setting and makes a living off transition.

Dick has the versatility necessary to play both inside and outside, but in this camp he was more of a post player than a perimeter player and we liked the way he competed, rebounded, and scored around the basket. Long is more of a slasher than a shooter, but he plays with a lot of energy, is an excellent rebounder, and is explosive in transition. Brown is active in the post and he will block some shots and get some rebounds. However, he needs strength, is not a tough customer, and he does not have much of an offensive repertoire. On the other hand, you can't teach size and his upside and potential makes him very intriguing. Alia was a like a jack-of-all-trades with his defense, competitive edge, and ability to score in a variety of ways and he was the perfect complement to the above mentioned Brendan Hausen on one of the best teams in camp. Parke is versatile enough to play either guard spot, but his forte is going coast-to-coast and finishing off transition. The two things that Goree does best are shoot the basketball and defend and he played with a lot more confidence than he did when we saw him four months ago at the 2016 John Lucas-Future of the Game in Las Vegas, NV.

The other Goree is more naturally talented than his twin brother, but he doesn't work as hard and he never seemed to get into the flow of things the same way he did when he was the #1-ranked player back in the spring at the aforementioned camp. Carney has a tendency to over handle, but we liked his athleticism and the way he can stop and pop from mid-range. Davis is more of a slasher than a shooter and what he does best is use his quickness and athleticism to finish at the rim. Boyd has a great nose for the ball, thrives in an up tempo setting, was one of the most naturally talented players in camp, and he'd be ranked even higher on this list if he was a little more unselfish with the ball. Ambrose is a pure point guard with good ball handling and passing skills and a knack for being able to get his teammates involved, which goes along nicely with his excellent speed and quickness and the fact that changes speeds and directions extremely well. We would have liked Green more if he was a tougher customer and he's more of a slasher than a shooter. However, he is extremely athletic and his forte is making things happen in transition. Ricks is a crafty little point guard with good speed and quickness, an excellent understanding of the game, and a knack for making those around him better.

7) 6'5 Frosh Jahshawne Spence from Toronto, ON