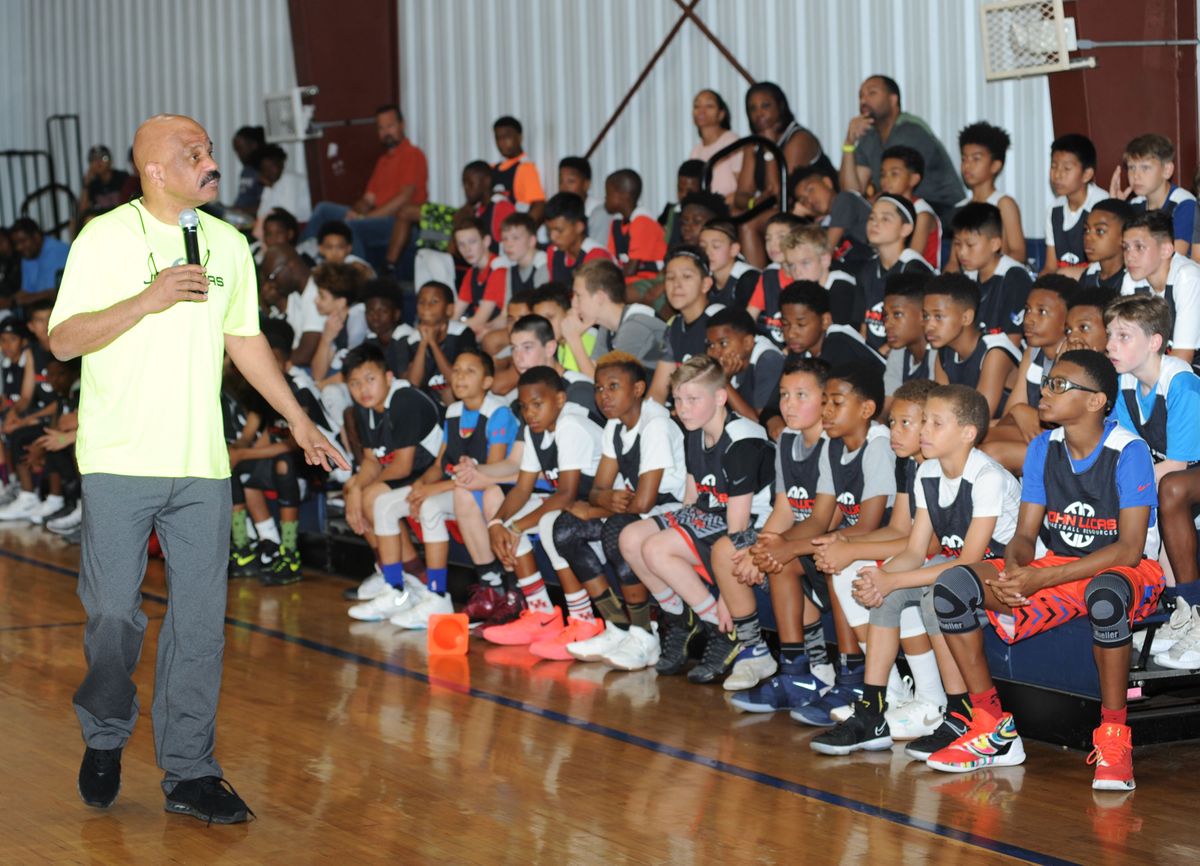 You can shake our top seven-ranked players (5'7 6th Grader Staci'o Goree from Phoenix, AZ, 5'11 6th Grader Landon Schumaker from Gilbert, AZ. 5'11 6th Grader David Delancy from Pembroke Pines, FL, 5'5 6th Grader E.J. Smith from Cordova, TN, 5'3 6th Grader Jackson Shelstad from West Linn, OR, 4'11 6th Grader Jaland Lowe from Houston, TX, and 5'9 6th Grader Andre Camacho from Peoria, AZ, ) at the 2017 John Lucas Future of the Game - Las Vegas, which was held over the weekend at the Tarkanian Basketball Academy in Las Vegas, NV, up any way you want and not be wrong. However, in the final analysis, we gave the nod to Goree based on the fact that this multi-dimensional athletic combo guard clearly out played Delancy in their head-to-head match-up in the final round of games on Sunday morning. He also was one of the few players in camp with a takeover mentality and he did a great job using his speed, quickness, and athleticism when going coast-to-coast and finishing off transition. He also has the ball handling and passing skills and court savvy necessary to play point guard, plus he rebounds extremely well for his size and position, and has a high basketball and an excellent pedigree.

We also thought that Schumaker separated himself from all of the rest based on his great length, excellent skills, and knack for being able to score and finish around the basket. He also runs the court extremely well, has a good nose for the ball, was very active on the boards, and is surprisingly agile, coordinated, and mobile for somebody so big and so young, And like most of the players in this camp, he is really thin. However, he has great hands and we also liked the way he competed, blocked shots, and the fact that he plays like a true post player. Delancy edges out Smith for the #3 spot based on the fact that he arguably is the most naturally talented player in camp, has a great combination of size, skills, and athleticism and has the versatility necessary to play just about any position of the court. He also has excellent moves to the basket, but he does have a tendency to be more of a slasher than a shooter and there were times when he dominated the ball and did not do a good enough job of getting his teammates involved. On the other hand, he also played on a team where it seemed like it was every man for himself and several of his teammates were among the top gunslingers in camp. Smith isn't as big nor as versatile as Delancy, but he shoots it better and we liked his quickness, body control, and anticipation, which allowed him to come up with more of his share of steals and make a living finishing off transition.

Shelstad and Lowe were the two best pure point guards in camp. However, we give the edge to Shelstad based on the fact that he has the same type of skills and competitive edge that one finds in University of Oregon point guard Peyton Pritchard. And, ironically, they both hail from the same hometown. Shelstad also has an excellent nose for the ball, terrific court awareness, and a knack for making those around better, plus he is an excellent defender and can more than keep you honest with his outside shooting. Lowe might be too smooth for his own good, but he has excellent skills, is quick afoot, and does an excellent job of setting the table and getting his teammates involved. He is more of a facilitator than a scorer, but he showed that he can keep you honest from behind the arc, is an good defender, and plays like the coach's son that he is (his father, Marlon Lowe, runs Texas Pro, which is one of the top club team programs in Houston). We also don't want to forget about Camacho due to the fact that he has a blue collar work ethic and take no prisoners approach, which he combined with his good size, strength, and athleticism and was one of the tougher match-ups in camp with his ability score and rebound around the basket. He also gets it done at both end of the court, is surprisingly mobile transition, and is not afraid to step outside and pull the trigger.

Next on our list is 5'9 6th Grader Tyler Harris from Hayward, CA, who has a silky smooth demeanor and used his speed, quickness, and athleticism to made a living off transition, finishing at the rim, and defending against both bigger and smaller guys. He does lack strength, there were times when he could have been more assertive, and he has a tendency to over handle, but he is oozing with upside and potential. It also was hard not to be impressed with 5'9 6th Grader Josh Goodall from Yorba Linda, CA, who is skilled in the post with his ability to score and get more than his share of offensive rebounds. However, he also runs the court, handles and passes extremely well for somebody his size, and can score from out on the perimeter. And rounding out our list of the top 10-ranked players in camp is 5'3 6th Grader Chase Clemmons from Woodstock, GA, who was clearly one of the most naturally gifted players in camp and has excellent ball handling and passing skills, great body control, and speed, quickness, and athleticism necessary to thrive in an up tempo setting.

We also thought 4'8 6th Grader Maverick Binder from Tabie Rock, NE, 5'6 6th Grader Terrace Pankey from Youngstown, OH, 5'6 6th Grader Jaden Goodall from Yorba Linda, CA, 5'6 6th Grader Stacy Goree from Phoenix, AZ, 5'6 6th Grader Zach Fluellan from Frisco, TX, 5'3 5th Grader Cameron Simpson from Orlando, FL, 5'5 6th Grader Eric Carrillo from Waddell, AZ, 5'6 6th Grader Esyah Pippa-White from Portland, OR, 4'11 6th Grader Leonard Romayor from El Mirage, AZ, and 6'1 6th Grader Ky Green from Peoria, IL were all good enough to be ranked in the 11-20 range in camp. Binder is a tough hardnosed competitor who plays with a lot of energy and makes things happens in an up tempo setting. Pankey has the versatility necessary to play anywhere from the one to the five, which he often did on defense, and he is at his best in an up tempo setting. However, he also won has a tendency to dominate the ball, which was often case as he attempted to be his team's primary ball handler. Goodall does not have the height that his above mentioned brother has, but he does have excellent ball handling and passing skills, is very unselfish, and can score in a variety of ways. Goree does not have the takeover mentality nor as much natural talent as his above mentioned twin brother. However, he does have a better work ethic and it will be interesting to see which one ends up being the better of the two in the long run. Fluellan is versatile enough to play either forward spot and we liked his court presence, athleticism, knack for being able to get it done on the boards, and ability to knock down the three.

Simpson was the best 5th Grader in camp and this athletic wing makes a living slashing to the basket and coming up with more than his share of steals and deflections. Carrillo more than made up for his lack of size and speed and quickness with his excellent skills, knack for finding a way to score, great nose for the ball, aggressiveness on the boards. and willingness to compete Pippa-White lacks an outside shooter's mentality, but he has a great nose for the ball, plays with a lot energy, and is excellent at attacking the basket. Romayor is a pint-sized point guard with great ball handling and passing skills, a knack for making those around him better, the ability to both knock down the outside shot and get to the rim. Green was the only player in camp 6-feet or taller and, based on his size, length, athleticism, and pedigree (his older brother is Josh Green), the popular consensus is that he was the best prospect in camp. However, he appeared to be out of shape and didn't get a lot done and, as a result, I dubbed him as more of a potential guy. Remember, unlike a lot of people in our business, our rankings are based primarily on what happens in camp, instead of what might happen down the road.

And, when we dig a little deeper, we also find that guys like 5'5 6th Grader Trent Perry from West Covina, CA, 5'5 6th Grader George Washington from Round Rock, TX, 5'6 6th Grader Adonis LaFleur from Las Vegas, NV, 5'7 6th Grader Preston Lee from Chandler, AZ, 5'2 5th Grade Elijah Gaeth from Omaha, NE, 5'5 6th Grader Julius Strahom from Kennesaw, GA, 5'3 5th Grader Aaron Powell from Altadena, CA, 5'5 6th Grader Blue Cain from Knoxville, TN, 5'0 6th Grader Jacovey Campbell from McKinney, TX, and 5'5 5th Grader Donovan Averitte from South Jordan, UT are also worth mentioning. Perry is a versatile athletic wing and, whether it be slashing to the basket, pulling up and hitting the three, or driving into the lane and challenging the big men with his nice floater, what this guy does best is score. Washington lacks size and strength, but he's versatile enough to play the one, two, or the three and he impressed us with his outside shooting. LaFleur is another guy who at times had a tendency to coast. However, it's difficult not to like his pedigree (his father, Andre LaFleur, is an assistant at UNLV) and he does have a good combination of size, skills, and athleticism, plus he picked things up as the camp wore on.

Lee impressed us with his hustle, versatility, and ability to finish off transition. Gaeth has excellent ball handling and passing skills and he's very good at creating his own shot. However, he has a tendency to over handle and we'd like him better if he did a better job creating for his teammates, instead of himself. Powell is a quick little point guard who impressed us with his ability to defend, get to the basket, and knock down the outside shot. Strahom is not a tough customer, but he is good in transition and he was one of the more unselfish players in camp. Blue is more of a slasher than a shooter, but he a good nose for the ball and he was a great glue guy on one of the better teams in camp. Campbell is a jet quick point guard with good ball handling and passing skills and makes a living picking your pocket and finishing off transition. And ditto that for McMillian, who is extremely quick in the open and excellent at finishing at the rim.